One of the most iconic television shows of all time, as well as one of the most quoted properties in pop culture history, The Simpsons has made hundreds of jokes that we all know, remember, and reference on a daily basis. Often times, these jokes revolve around extremely absurd concepts that could only happen in a cartoon or a satire – according to the writers at the time. Sometimes, these jokes underestimate just how low humanity (and often, America) can go. The Simpsons predictions listed here all came true!

Here’s a collection of hilarious Simpsons jokes that really ended up being true, happening or being repeated elsewhere. There are some crazy things The Simpsons predicted, so read on to find out what!

13 years before Canada actually legalized marijuana, Ned Flanders and Homer take a trip to Canada when prescription drugs get too expensive in Springville in the “Midnight Rx” episode (2005). While on their trip, Ned is offered a puff of some “reeferino” by his Canadian doppelgänger—to which Ned responds, “They warned me Satan would be attractive. Let’s go!”

The Joke: In a series of flashbacks in “And Maggie Makes Three,” The Simpsons reveals the cause of Homer’s gradual hair loss. It seems his go-to reaction after discovering Marge is pregnant is to panic and pull out his own hair. Maggie is the final straw, rendering the beloved TV dad completely bald as he tears out the last of his locks while letting out a blood curdling scream.

What Actually Happened: Prince William and wife Kate Middleton welcomed three children from 2013 to 2014. With each subsequent birth, William’s hairline receded. Internet sleuths pointed out the trajectory of Homer’s hair closely matched that of Prince William’s.

The Joke: In an effort to raise the self esteem of Springfield – and boost the spirits of Lisa Simpson – Lady Gaga decides to hold a concert in the Season 23, Episode 22 titled “Lisa Goes Gaga.”

During her show, Lady Gaga zooms over the audience wearing a wire and a platinum silver outfit. As the crowd looks on she blasts pyrotechnics from her breasts and sings about loving and accepting yourself.

What Actually Happened: During the Super Bowl LI halftime show, which aired almost five years after The Simpsons episode, Lady Gaga flew over the audience on a wire. People pointed out the similarities between the performance and the cartoon in not only her wire act, but in her outfit as well. Unfortunately for Gaga fans, she didn’t shoot sparks out of her boobs.

The Joke: In the Season 22 premiere, Milhouse and Lisa participated in a who-will-win-the-Nobel-Prize betting pool. For Economics, Milhouse, who lost to Martin, selected Bengt Holmström.

What Actually Happened: In 2016, Bengt Holmström of MIT and Oliver Hart of Harvard were jointly awarded the Nobel Prize in Economics “for work on contact theory and how to evaluate whether things should be government-run or privately owned.”

The Joke: In the 1998 episode “When You Dish Upon a Star,” Homer becomes the personal assistant to Alec Baldwin and Kim Basinger when they move to Springfield. He winds up pitching a script to Ron Howard, and by the end of the episode Howard is pitching that same script to 20th Century Fox. A sign outside the studio reads, “a division of Walt Disney Co.”

The Joke: In the 2010 episode “Boy Meets Curl,” Homer and Marge lead the United States curling team to a gold medal over Sweden and Russia.

What Actually Happened: Team USA edged out number-one-ranked Sweden to take home the gold in the 2018 PyeongChang games.

The Joke: As seen in the video above, Lunch Lady Doris is seen throwing gym mats into a meat grinder in order to prepare the school lunch for the day.

Anyone who’s ever had a public school lunch knows how completely inedible they can be, and some of the wet, warm, questionable objects on your styrofoam, sectioned-off tray do seem like they have hazardous chemicals as their base…but gym mats?

That’s unheard of, that would never happen, right?

What Actually Happened: It turns out that the bread used in the McDonald’s McRib actually contains an ingredient (banned in some parts of Europe) that is used to keep gym mats sponge-y.

Time Magazine‘s Healthland blog ran a story about the McRib and its ingredients. It identified Azodicarbonamide as one ingredient found in the sandwich’s bun and apparently, it is most commonly used in the manufacturing of foam gym mats and the soles of shoes.

The blog also noted that the 70 ingredients of the McRib, including Azodicarbonamide, exist in very small quantities and will almost certainly leave anyone eating a McRib unharmed. Subway was also found to be using the chemical in its bread, too.

Still, Azodicarbonamide is a substance banned in Europe, and strictly regulated by the FDA.

Looks like the Doris joke really wasn’t that far off.

The Joke: In the episode “In Lard Of The Dance,” Homer discovers he can make money by stealing and reselling grease found in the back of Springfield Elementary’s kitchen. They even build a contraption so that they can steal the maximum amount of grease in their car.

They eventually give up after a few encounters with Groundskeeper Willie and the Springfield Grease Company. Bart and Homer barely escape an angry, greased-up Willie while trying to make it home-free with their glorious, profit-garnering grease in tow.

What Actually Happened: In November of 2011, The St. Louis Post-Dispatch reported that thieves had stolen at least $2,000 worth of grease from the privately-owned restaurant The St. Louis Wing Co. since April.

“It’s a big deal. There’s a huge underground out there for this stuff,” owner Bobby Thessler said. “Others have said that this is like the new copper… These thieves are getting more sophisticated…”

The Joke: Principal Skinner tries to set Bart up to get in trouble, so he concocts something called “Scotchtoberfest,” which allows him to control an entire event in which he knows Bart won’t be able to resist pranking Groundskeeper Willie. Skinner attempts to catch Bart in act. The Joke: Homer tells the local tavern owner Moe about a secret cocktail that includes cough medicine and fire that he calls a “Flaming Homer.”

Moe steals the recipe and renames the drink the “Flaming Moe,” and begins selling it at his tavern, betraying Homer in the process. The drink is a success and Moe becomes famous, even Aerosmith drops by to perform at his place! What Actually Happened: Andy Heidel, the owner of a bar in Prospect Heights, NY called The Way Station, just happened to have a bottle of Robitussin behind the bar when someone brought up the Flaming Moe. Not sure why you would have cough medicine behind a bar, but whatever. He grabbed the ‘tussin and mixed it with Pernod, Jagermeister and a Bacardi 151 floater and set it on fire. He and his friends got shmammered and the real-life Flaming Moe was born.

The Joke:
Lisa begins to feel threatened by Allison, a new student, because she is smarter, younger, and a better saxophone player than she is. 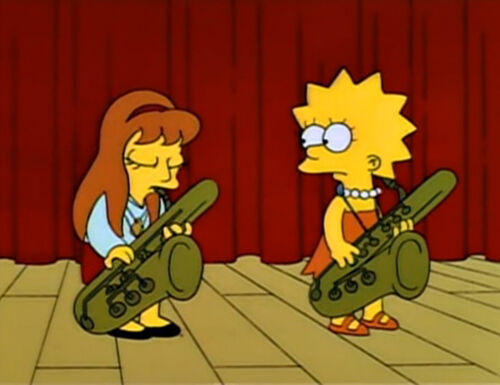 Their rivalry reaches a climax at the school’s diorama contest where Lisa plans to sabotage Allison’s entry. The episode’s subplot sees Homer steal a large pile of sugar from a crashed truck, and begin selling it door-to-door. He keeps it in the back yard and it eventually melts from the rain.

What Actually Happened: Someone actually stole a freaking sugar truck.

No word on whether or not they planned to sell it door to door.

I Was Elected To Lead Not To Read

The Joke: This was a dig at Governor Schwarzenegger from The Simpson’s Movie, saying he was too dumb to be a Government official.

The line “I was elected to lead, not read,” was such a ridiculous statement because an elected official’s entire job is reading long, difficult legislation, making sense of it, then deliberating.

What Actually Happened: In the 2012 GOP race there was a man by the name of Herman Cain, and he ran on the slogan “We need a leader, not a reader.”

So yeah, that almost happened.

What does that slogan even mean? You need to read and be at least somewhat of an intellectual to run a country, that’s why that joke in The Simpsons is so fun and why in the real world it’s just so tragic.

In the Simpsons, the Good Morning Burger was 18 ounces of sizzling ground beef soaked in rich creamery butter, topped off with bacon, ham, and a fried egg.

This was before all fast food restaurants started carrying a regular menu of heart-attacks every morning before 10:30AM, so it really worked as a satire of how horrible fast food is for you.

Before the “Baconator,” a Sourdough Jack, or even a triple cheeseburger were as bad as things got.

The Good Morning Burger seemed so ridiculous and far off that it could never really happen. 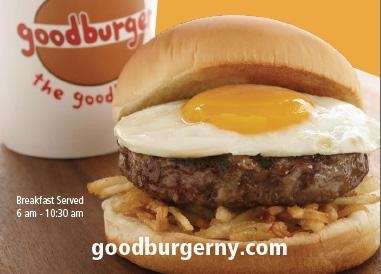 What Actually Happened: This take on the Good Morning Burger is quite similar: hash browns, topped with a hamburger, topped with a fried egg. There are hash browns under a burger that’s under a fried egg.Another good example of how far things have gotten in fast food are, of course, the KFC Double Down and their “failure bowls” (as comedian Patton Oswalt calls them in this bit). 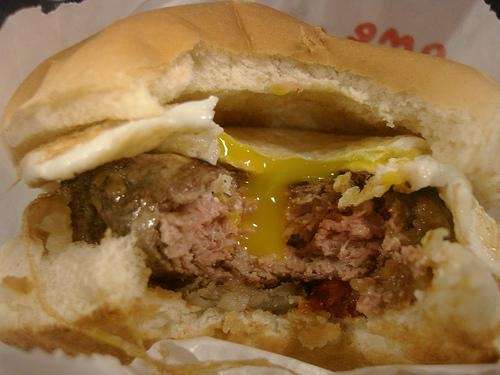