While L.A. food trucks often simply show up at scheduled locations, many food truck enthusiasts enjoy the hunt of tracking down their favorite truck in the city. Luckily for these foodies, the food trucks use the Internet and social media to communicate their locations and specials. (If you can’t make it out to one of these trucks, doesn’t mean you can’t experience Epic Meal Time.)

In addition to posting their menus, schedules and planned locations on their official websites, many food trucks will inform their fans of other news, such as specials, using their Twitter and Facebook accounts. As if that was not enough, there are a bunch of secondary websites strictly devoted to tracking Los Angeles food trucks and providing food truck fans with and LA food truck map or a food truck locator/food truck tracker to get their food truck on.

Serving–you guessed it, grilled cheese. This truck is undoubtedly one of the most popular in the city. The Grilled Cheese Truck takes on classic versions of its namesake along with a slew of other variations. Try the ol’ Cheesy Mac and Rib, Goat Cheese Melt (on Nine-Grain Bread) and Dessert Melts–all popular choices that are quite delicious! If that’s not enough, there’s a slew of extras you can get added on, like bacon, smoked pork and even apples and pickles. It’s not your mama’s grilled cheese, but it’s still pretty dang good.

As the father of the food truck revolution in Los Angeles, the Kogi BBQ is known for its long lines and fiercely loyal fans. The truck serves Korean Mexican tacos, burritos, sliders and beverages. Tacos, with the choice of short ribs, spicy pork, chicken or tofu, run around $2 each while burritos and Kogi favorites are $5. Combo plates with a selection of items and a drink can be had for $7-10.

Named after the French word for a cube of pork fat, the Lardon Truck specializes in gourmet dishes featuring artisanal bacon. Specialties include their brioche french toast sandwich with crumbled bacon and bacon-bourbon maple syrup; chicken wings cooked in bacon hot sauce and topped with…more bacon; and their bacon-licious signature BLT. And for dessert? Brownies with a bacon Nutella spread. (You didn’t think they’d stop at their entrées did you?)

Mmm… artisanal ice cream. Coolhaus offers a refined take on everyone’s favorite dessert, whipping up gourmet ice cream sandwiches that they swear look like “cool houses”. The jury’s out on that one, but one thing everyone can agree on: these sweet treats are delicious.

As the name suggests, the Buttermilk Truck uses buttermilk in nearly all of their menu items. The truck serves primarily breakfast foods and sweets like pancake bites, buttermilk breakfast sandwiches, donuts and breakfast sliders. Late night diners get access to a special late-night menu of fried chicken with homemade cinnamon waffles.

Though they are perhaps best known for winning “The Great Food Truck Race” reality show, the boys at Grill ‘Em All hold their own on the streets. Come hungry as their offerings are filling (to say the least). Their $10 Behemoth burger uses grilled cheese sandwiches as buns to surround (more) cheddar cheese, bacon, grilled onions, pickles, a signature BBQ sauce and, of course, a burger. You may not be able to walk after, but your tastebuds will be happy.

The specialty of the house (well, truck) is the Lobsta Roll, featuring fresh lobster meat on a toasted split-top roll with mayo or butter. (A similar sandwich with crab is also available, as is clam chowder.) For dessert, there’s ice cream sandwiches and whoopie pies. It’s a bit pricy for food truck food, sure, but this is LOBSTER we’re talking about!

The LudoTruck (also known as “LudoBites”) is the mobile home of renowned French chef Ludovic Lefebvre, perhaps best known for his appearance on the first season of the Bravo series, “Top Chef Masters.” The truck features Chef Ludo’s famous fried chicken and seasoned fries, lavender honey biscuits and a variety of gourmet sauces.

Who doesn’t love a good falafel? That’s what the fine folks at Yalla bring to LA on a daily basis, but with a special twist. Mixing traditional falafel with a new school ingredients (think peanut sauce or black beans & corn), Yalla has carved a niche for themselves in the competitive LA food truck scene.

Described as a coastal-infused cuisine, the Vizzi Truck cooks up high-end dishes such as white truffle popcorn, venison burgers, wagyu beef sliders and a one-of-a-kind foie gras peanut butter and jelly. Compared to other Los Angeles food trucks, you’ll pay a bit more, around $10 for many items, but the quality ingredients make up for that dent in your wallet.

Me So Hungry Truck

Loading big international flavors into even bigger burgers, the Me So Hungry Truck bills itself as the ultimate truck for “foodies.” Bold flavors, fiery sauces and unlikely combinations dominate their seasonally rotating menu.

Serving Mexican snacks like tacos, quesadillas and cones (similar to a taco-hand roll), this truck is one of the gems of the food truck scene. With much of the menu costing no more than $6, you can get great snacks at a low price.

Using an actual school bus, the Gastrobus serves up snacks and sandwiches using fresh ingredients from around the city. The bus can often be found in front of the Los Feliz Farmer’s Market on Sundays for brunch where they make sweet potato fries, root beer floats and other goodies ranging from about $2 to about $6.

The only constant on this delightful menu is its creative use of greens. Whether its a salad, sandwiches or even delicious melts this truck specializes in a variety of different types of yum.

With two trucks serving “dangerously good food,” Komodo specializes in a modern California-Asian fusion cuisine. Entrees have the taste of that in sit-down restaurants but in the portable form of tacos, for $3, and burritos, for $8. Fillings range from the Komodo 2.0 with seared sirloin, jalapeno aioli and southwest corn salad to fish and grapes, veggie soy tempeh, shrimp, chicken and pork. Plenty of sides are also available for around $5 such as their truffle fries and crab cakes.

Mixing traditional Vietnamese favorites like banh mi sandwiches with Southern California fusion foods like traditional tacos and Vietnamese tacos, the Mandoline Grill puts together the best of both worlds. While those are the only things that the truck serves, doesn’t mean that they don’t know how to do it right. 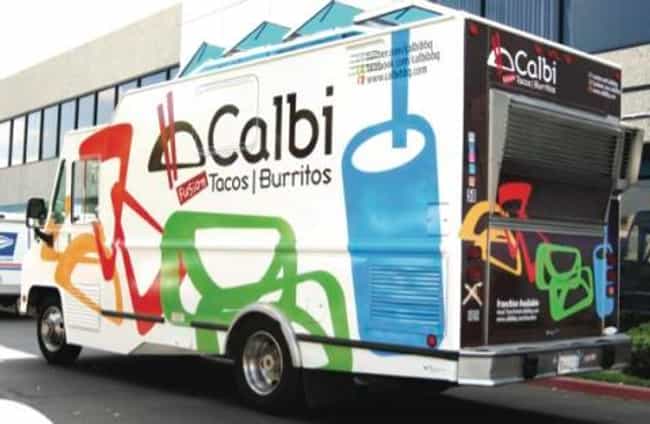 Offering a fusion of Korean flavors with the street-food style of Mexican entrees Calbi provides “a new generation of tacos.” Pick the type of dish, then decide between Korean beef short ribs, chicken, pork, shrimp or tofu to create custom tacos, burritos, quesadillas and rice bowls.

Bringing the southwest flare of Texas to Southern California, the Macho Nacho Truck specializes in nachos and burritos, both of which are available for around $7 each. Featuring beef, BBQ pork, chile verde and a number of other toppings, diners can enjoy a heaping portion of nachos made with homemade chips.