The 12 Greatest Babies in Internet History

Baby memes and videos have been a staple of the Internet since the very beginning of viral videos. From the famous “Dancing Baby,” to “Charlie Bit My Finger,” to “Success Kid,” and some of the most famous images to have ever hit the web. These funny baby meme pictures of famous babies in history (OK, maybe “infamous” is more accurate here), will have you laughing like crazy.

Be it a video, a picture, or a meme, these babies will tickle you pink and brighten your day with their cute smiles and baby giggles. Babies are innocent, squishy, adorable, and joyous enough in and of themselves. They’re a constant source of fun, family-friendly entertainment that can be enjoyed by all. So buckle your seat belts and get ready for some adorable and hilarious babies coming your way in the form of these baby memes.

In early 2011, this video of two babies seemingly talking to each other in complete gibberish hit the front page of Reddit, leading it to be posted pretty much everywhere else on the Internet and then on television a few weeks later.

Remixes and other videos were made immediately, most notably by comedian Patton Oswalt. With over 70 million views, the video has made the babies involved some of the most Internet famous babies in history. It’s like they’re making fun of us. In the right state of mind, this video could lead you to an existential crisis.

This little guy has become one of the most well-known .gifs used regularly to express surprise or disgust in regards to the post being talked about.

His name is Emerson, and the popular .gif came from a viral video off of YouTube featuring little Emerson playing happily with his throne of toys, that is, until his mother would blow her nose. This would scare the baby temporarily, reacting with such surprise that the Internet immediately fell in love with him.

He’s arguably the cutest baby on this list. I will fight you on this.

The most well-known moment comes at 00:43

There’s nothing better than a baby’s laughter. (Except on an airplane. For some reason, parents don’t seem to realize that the sound of a baby squealing with delight is just as loud and awful as that of a baby shrieking in agony.) (Am I a bad person?) This little fella is just having himself a hell of a time listening to [who I presume is] his dad making sounds. This could easily be the best day of his life so far.

He was also one of the first babies to go viral once YouTube began, garnering over 150 million views across multiple videos, getting on countless news stations and even being the choice clip shown to The Queen of England upon her visiting YouTube headquarters in 2008.

Over half a billion views. The kids from “Charlie Bit My Finger,” a video featuring a kid and his baby brother who keeps biting his finger, has been seen by more people than most of your favorite TV shows. Networks would KILL for this kind of exposure.

And all these kids had to do was be insanely adorable.

In 2007, YouTube user HDCYT’s video featured a 1-year-old biting his 3-year-old brother’s finger, as the older one complains about how much that hurts, kindly asking his brother not to bite his finger in the most politely British way imaginable.

You’ve seen “Success Kid” before. Plenty of times. He’s a little man named Sammy whose mom took a picture of him that went up on Getty Images in 2007. Then in 2008 (aka the Golden Age of the Internet when .gifs were still used to communicate and page backgrounds were allowed to be sparkly), the popular photoshop of “Success Kid” (then known as the “I Hate Sand Castles” kid) made the rounds on sites like MySpace. Once this took off, Sammy became extremely common throughout the Internet as a picture anyone can use to express their excitement at something relatively mundane.

And once he was made into an Advice Animal (first seen in this form as uploaded to Reddit), much like most other Advice Animal memes, he became ubiquitous around the web.

Easily one of the most watched videos of 2009, if not the biggest viral video that year. This little tyke’s name is Cory. Cory’s parents were so pleased by his instant Internet fame when the video of him dancing to Beyonce’s “Single Ladies” (which is a whole meme in of itself), that they made the baby a Twitter account, t-shirts, and capitalized on their Internet stardom as quickly as you probably should.

Unless you’re Scumbag Steve, you only have a matter of weeks before that goes away.

The greatest short cut ever taken by a baby in any Internet video with over 3 million views ever.

The video was originally uploaded to YouTube by a Redditor named Stardestroyer65 (obviously a Star Wars fan) who shot this video of his daughter playing with her toys, then seeing a car fall on the ground, which led to her laughing like a supervillain at the demise of the small imaginary people in the car.

Various video manipulations were made once the thing went viral, and the video was soon given the Imperial Death March and various other songs that made the child’s victory over the car seem so… evil. Yet adorable.

Just a viral YouTube video featuring exactly what it sounds like. With over 15 million views. It is pretty cute how surprised and delighted the parents are by what had just happened.
When life hands you lemons and you don’t really know what they are because you’re just a baby, you’re in for a sour surprise. But oh, the faces you’ll make! You could be an Internet celebrity! This one is my favorite:

Sometimes, it’s to celebrate, as with the unsavory yet hilarious Third World Success Kid. Due to his circumstances, he relishes in the small victories, like surviving malaria and not knowing who Snooki is:

Sometimes, the meme kid’s gesture and expression serves as a warning. The How Do I Put This? Babygives cautionary advice to family, friends, and strangers: 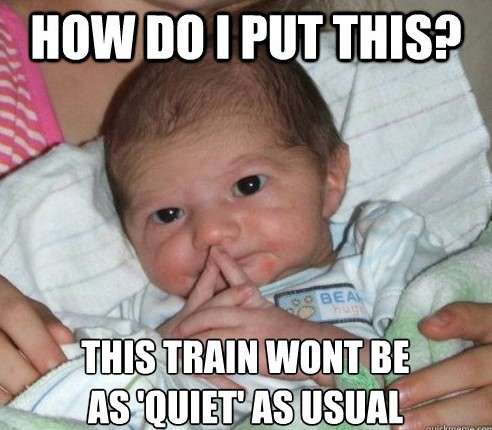 Baby Godfather is also scowling and upset – but adorable, all dressed up in a widdle tuxedo with those chubby widdle cheeks – and not about to take it lying down: The “Crazy Mean Baby” or the “Incoming Baby” is, much like “Success Kid” at first, a popular photo meme that started from the Superherohype.com community.

Once people saw a picture of this baby looking like it’s yelling orders out of a foxhole or in the middle of a tirade, they started making all kinds of photo manipulations putting the baby in different situations, the most popular of which is one of him in an army helmet. Some people, though, even put him in a series of film situations (a 7-minute long video montage of which can be seen on this video here).

According to KnowYourMeme.com and some random jerks on the Internet, the kid’s dad was a graphic designer (unlike anyone else on the Internet) and a photographer. He threw some Photoshops of the “Crazy Mean Baby” online along with the original to do that thing that street performers do by throwing a few dollars into the guitar case so it looks like someone’s already given – only for memes. The guy seeded his own meme, which is smart. It’s one of the most recognizable and commonly known images on the Internet, and an adorable picture of a baby, who is now probably old enough to be embarrassed by its existence.