The longest-running animated show in the history of television has always had a tradition of sticking it to organized religion. It’s shows like The Simpsons that have enough of a cultural impact to be able to satirize and bring to light some of the most important issues we face today. So, in all their poignant glory, here are all the greatest, funniest and most memorable anti-religion jokes in The Simpsons’ history as one of the best shows on television.

What are the greatest Simpsons religion jokes? Take a look here and you’ll discover some of the best ones on the show, ranging from jokes about Christians, to creationist jokes, to even funny atheist jokes. The Simpsons always nail it on religious jokes in general. Throughout Simpsons history, establishing shots outside of a scene in the church have featured the church sign. Every church sign’s marketing copy is another chance for the writers to poke a little fun at the institution of the church or just to have fun at what might be some inappropriate things to post at a church.

Here’s what was featured on some of the most notable church signs in Simpsons history:

God, the original love connection
Every Sunday is super Sunday
Today: what a f iend we have in God, Also: the Be sharps
Private Wedding, Please worship elsewhere
No Shoes, No Shorts, No Salvation
God welcomes his victims
No synagogue parking
Next Sunday: the miracle of shame
Christ Dyed Eggs For Your Sins
Todays Topic: There’s Something About the Virgin Mary
If You Were a Pastor, You’d Be Home Now!
Welcome Pissed-Off Catholics
No Outside Eucharist
God: The Original Tony Soprano
Housewarming Party: Let There Be Light Beer
We Welcome Other Faiths (Just Kidding)
Rapture Threat Level: ORANGE
Today: Bobble-Head Moses Giveaway
QUIT ST3ALING OUR L3TT3RS
Christmas Service Jesus: 2005 Years Young
Today’s Topic: Jesus Hates You
Today: Church Council Meeting Topic: Religion
Funeral Today: Homer Simpson’s Vegas Wife
Thou Shalt Turn Off They Cell Phone
Today’s Topic: Jesus The Real American Idol
Shadrach, The Other Friend of Meshach
Free Wi-Fi During Sermon
Get Your Ass In Here, Tim
Tomorrow: Bart’s Funeral
“today’s subject is hell. ” “would you eventually get used to it like in a hot tub? Are there any pirates in hell?”

Little by little the episode tears away at any logic that is usually associated with Creationism and exposes every facet of the argument against evolution and the religious right’s attempts to hide the science from the world. Masterfully done in a pointed, biting, yet still hilarious and not aggressive fashion at all.

The entire thing starts with this wonderful scene of Ned Flanders taking his two sons, whom he raises as very far right fundamentalist Christians, to a museum only to find it filled with nothing but scientific relics of history.

And the rest of the episode gets even better. This episode, as a whole, is one of the greatest criticisms of Creationism in television history.

Good Thing We Came To Our Senses 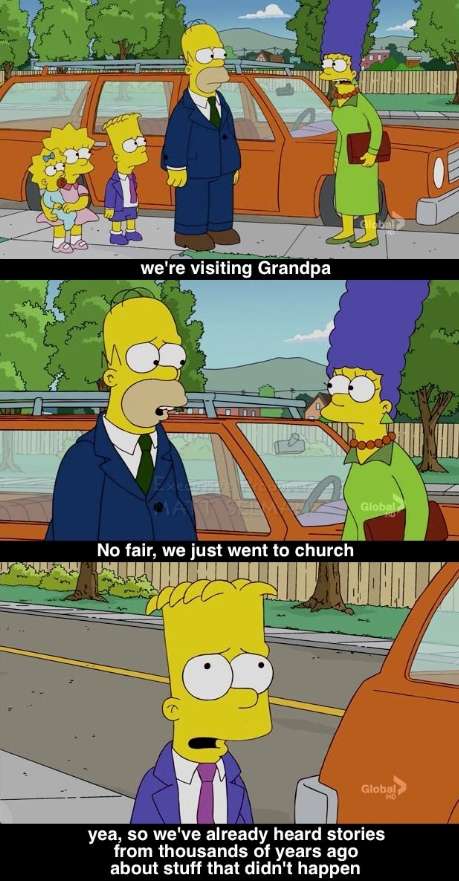 Whenever Homer Misquotes or Dismisses The Bible

“But this book doesn’t have any answers!” – Homer

Quite often throughout The Simpsons’ long history, Homer refers to parts of The Bible that don’t necessarily exist in order to further some personal gain of his, which in of itself is a great comment on how many Christians (who can’t quote more than a few verses of The Bible that aren’t found in action movies) use it on a day to day basis. Here are some great moments in Homer (mis)using The Bible for his own personal gain.

[Homer says] “Your mother has this crazy idea that gambling is wrong, even though they say it’s okay in the bible.” [Lisa asks him where] “Eeeeh, somewhere in the back.”

[When Homer becomes an inadvertent missionary to a tribe and wants to eat all the food] “Yes, but doesn’t the Bible also say “Thou shalt not take… moochers into thy… hut”?

When Homer swears on a Bible, which turns out to be a book of carpet samples.

“Look at this Bible I just got. 15 bucks! And talk about a preachy book! Everybody’s a sinner!”

[On Kent Brockman’s talk show]
Lovejoy: Well, call me old-fashioned, but I believe marriage [as] described in the bible..
Homer: If you love the Bible so much why don’t you marry it? In fact, I now pronounce you and the Bible man and wife…. and you’re the wife! HAHAHAHAHA!

At some point, Homer takes a Bible out of the nightstand and tears out ribbon to use in another book.

Homer has so much distaste for The Bible, in fact, that he actually forgets who Jesus is a lot of the time. The two greatest examples are:

1) When Ned takes Homer to Jerusalem…

Homer: It’s so nice and cool in the tomb of the unknown savior.
Ned: Unknown??!! This is the tomb of the most famous man who ever lived!
Homer: Porky Pig?
Ned: Porky Pig’s not a man he’s a pig and he’s not even a real pig!
Homer: But.. he is buried here, right?
Ned: That’s it! I’m losing it! I’m losing it! You come all the way to Jerusalem, the happiest place on earth and all the photos in your camera are of funny soda pops?

One of many jabs at the church in Simpsons history, this one gives a big left hook to the way Christian worship is not only structured, but how it earns a lot of its money. Especially when comparing it to Scientology or any other cult. In the clip above, Kent Brockman goes from condemning an obviously corrupt system, to being immediately for it after receiving some kind of cash incentive.Much like a lot of the religious gurus who sell millions of books and sell out stadiums when they speak, charging insane ticket prices, money is quite often the driving force behind a lot of the most well-received and creatively-marketed and established religious presences in America today.

But then there’s this clip…

This is probably the most brutal joke in the episode, if you don’t include how it is all one huge joke on Scientology. The leader, being similar to L. Ron Hubbard (creator of Scientology), in needing money to be part of the religion.

The leader later tries to escape with everyone’s money in his promised space ship that would come to Earth to save all humans from the end of the world, when he’s foiled by his own poor planning as the ship reveals itself to be himself on a flying bike making sounds with a hair comb, some paper and his mouth. 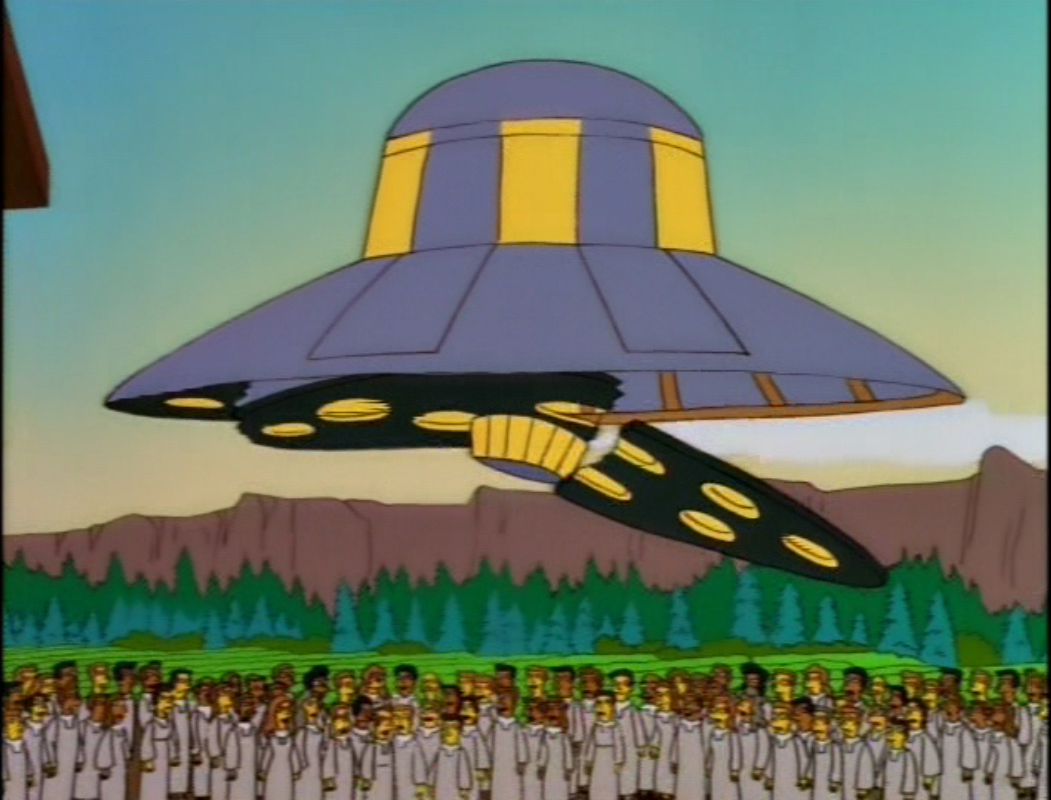 The throwaway lines like this one are what make up some of the most brutal criticisms of religion in the Simpsonsverse. By themselves, they’re relatively harmless, but the fact that the most outspoken Christian in Springfield (moreso than even the Reverend) subscribes to “Pious” magazine says a lot, but the fact that he “subscribes” (literally, in this case, but the metaphor is in there) to the Old Testament is a direct criticism of fundamentalists today.

The fact that fundamentalists very largely subscribe to Old Testament stories as literal and use parts of it to keep rights away from certain citizens of the U.S., yet choose to blatantly ignore other parts, makes this cutaway that much more damning, and that much more hysterical.

Hypocrisy and God in American Politics Thanks to Redditor Soahc17 for the rage comic, where he realizes that this specific part of this Simpsons episode directly satirizes religious extremists who just aren’t willing to listen to reason.

The Episode Where Bart Thinks Maude is Dead In the episode that’s a clear homage to Rear Window called Bart of Darkness, Bart thinks he sees Ned Flanders kill his wife Maude. Throughout the entire episode Bart tries to prove that Flanders is a killer because he heard a woman’s scream (which turns out to have come out of Flanders’s mouth) and heard him say that his wife Maude was “with God now”.

At the end of the episode it turns out that she was alive all along and that everything had a perfectly sound explanation. The scream was Flanders, not Maude, in response to getting purple drapes he’d always wanted.

As far as where Maude was, the following is what she said in response to Bart’s questioning of her whereabouts: “Oh, that’s right.  I was at Bible Camp.  I was learning how to be more judgemental.”

Flanders Has Done Everything the Bible Says