US Presidents with the Strangest Hobbies

Let’s face it, it takes a pretty uncommon person to become president. That probably means that there are going to be more than a few US presidents with weird hobbies. Given that a good number of presidents didn’t have television or even radio, they had to find something to do with all their time. Some of the hobbies of US presidents were more ordinary, like playing piano or collecting stamps. But some great men just can’t have regular hobbies. No, those men have to do things to the extreme. Some take up recreational violence (sports like boxing and wrestling) on the side, or eccentric rituals, or even creative pursuits. Sometimes, great men need great hobbies to occupy their time.

So, if you’re curious check out the list of weird hobbies of US presidents below and vote up your favorite presidential hobby. Just keep one thing in mind: no one, president or otherwise, will ever be able to match the pastimes of Teddy Roosevelt

When he wasn’t leading a revolution, Thomas Jefferson loved to invent gadgets. He helped advance the science of agriculture by inventing a plow that was easier to pull. He also created an updated sundial in the form of a sphere. But his coolest work was to help out American spies during the Revolutionary War. He invented the “wheel cipher,” which was an iron pin containing 26 spinning wooden disks that could be used to decipher coded messages. That way, The British couldn’t read intercepted messages.

John Quincy Adams had a lot of history attached to his name. He was the son of a founding father, he died on the floor of congress, and he was the sixth president of the United States. He also loved to swim around naked. It’s been reported that he would wake early every day and swim nude in the Potomac River at 5 a.m. The first female journalist ever to interview a president, Anne Royall, accomplished this historic feat by withholding Adams’ clothing until he agreed to a discourse.

Lyndon B. Johnson Liked to Scare His Guests During Joyrides 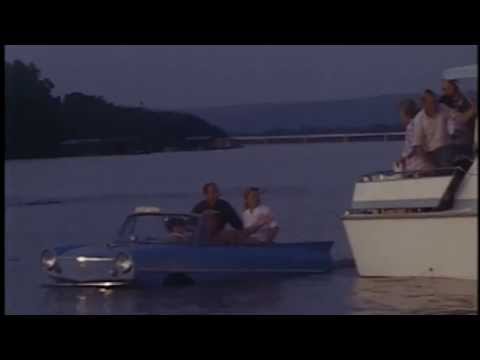 Remember that scene in the A Spy Who Loved Me with Bond’s submarine car? Well, LBJ beat him to it by about ten years. The president had an amphibious car he often used to drive his guests around his ranch. As he drove, he’d pretend to lose control of the car (and its brakes) as it sped into a lake. This, of course, scared the hell out of his guests – who were reportedly delighted to learn the car was amphibious shortly after. It was as much a morbid pastime as it was a way to test the character of those he drove around.

President Coolidge really loved riding horses, but developed an allergy that meant he was unable to ride them. So, when someone gave him a mechanical horse as a joke gift… he didn’t really see the joke. He put it in a dressing room right next to his bedroom so he could always keep it close. He rode the apparatus regularly while wearing his hat, which amused his wife and their guests to no end. At the end of the day, no one had a problem with the practice because it let the president get some exercise.

Teddy Roosevelt Loved to Throw Down in the Ring

Back when Roosevelt was governor of New York, he started taking wrestling lessons from the middleweight boxing champion of the time. Roosevelt’s financial advisor was horrified and tried to suggest he take up billiards, instead. But Roosevelt had already fallen in love with boxing. In fact, Roosevelt boxed well into his presidency, but had to stop after an artillery captain permanently damaged his eye. Still, you have to respect a leader of the free world who’s willing to step into the ring with any opponent.

When a person breeds a male donkey and a female horse, they get a mule. People frequently use mules as pack animals because of their hardy and obedient natures (and also because they eat less). They also weren’t native to America before George Washington. After seeing how effective they were in Spain, our first president spent a pretty big chunk of his time breeding mules. The towns people and local farmers of Mount Vernon joined Washington in his crusade, using George’s animals to breed their own.

Not only did Lincoln lead America through the Civil War and help end slavery, he also knew his way around a wrestling mat. When he was a kid in New Salem, Illinois, Lincoln learned to grapple and got quite a reputation after beating a local bully. Even more impressive was that his ability to kick butt was mentioned during an election in 1858. His opponent, Stephen Douglas, used his knowledge of Lincoln’s wrestling tales to prove that he knew him well. When Lincoln ran for the presidency in 1860, the mentions of his wrestling skill came up again… only this time he won the election. In the end, it’s become part of the Lincoln legend portraying just how strong and righteous he was.

In addition to fighting just about anyone he could in the ring, Teddy Roosevelt tested his constitution by hunting every type of animal he could find on God’s Earth. His true test as a hunter really came after his presidency when he took an 11-month safari through Africa. On that trip he trapped or shot over 11,000 animals which includes just about everything you can think of from insects to elephants. He then had the corpses stuffed as pieces of taxidermy and donated them to the Smithsonian Institution.

Richard Nixon Was a Card Shark

You would think Nixon’s paranoid personality would make him lousy at cards, but that couldn’t have been farther from the truth. During his time in the Navy during World War II, Nixon got an infamous reputation for being the best bluffer in the service – Tricky Dick, indeed. He won so much money during his time in the service, he used it to fund his campaign for the US House of Representatives in 1946. He continued to play with other Congressmen, and some would later say he wasn’t as good as his reputation suggested.

President Obama Collects Comics Like They’re Going Out of Style

There have been quite a few geeks in the White House, but President Obama might be the biggest nerd president we’ve ever had. Not only is he a huge Star Trek and Game of Thrones fan, but he also has a huge comic book collection. According to him, he grew up loving Conan the Barbarian and Spider-Man. In the following years, President Obama has made appearances in several comics, the most famous of which is a variant cover of Amazing Spider-Man 583 pictured above.

FDR loved detective stories. Despite his adoration of the genre he had a problem with just how formulaic the stories were. So, he started thinking of his own plot which he discussed with his friend Fulton Oursler, a magazine editor. They came up with a plan to take some of the best authors of the era, giving them FDR’s plot, but write it as a round robin. The idea was to have each author write a chapter that would leave the protagonist in a dangerous situation the next author would have to write him out of. While the book was published in 1936, it actually ended on a cliffhanger that wasn’t resolved until 1967 when the creator of Perry Mason, Erle Stanley Gardner, tied everything up in a concluding chapter. The book is titled The President’s Mystery Plot.

YOU MAY LIKE  The Least Credible Alien Sightings in History
Tags:Historical FactshistoryPoliticsUS Presidents
previousHere’s What Presidents Do in Their Final Days in Office
nextThe 50 Hottest Founding Fathers