15 Stories of Twins Who Were Separated at Birth

This study generated so much controversy when it became public that the results were embargoed until 2066, and many states banned the separation of adopted twins. Many other twins were separated due to world events, such as war, or cultural difficulties. In some cases, they found each other quite quickly because of social media, and in others, it took decades of one or both siblings knowing something was off about their upbringing, and there was someone out there just like them.

A few of these stories have taken turns for the bizarre, such as the twins separated in the 1930s with one ending up raised Jewish, and the other being forced to join the Hitler Youth. Then there are the poor souls who met, fell in love and married – never knowing they were actually separated twins.

An astonishing story out of Colombia came to light in June 2015, involving two sets of identical twins who were accidentally switched at the hospital where they were born, then reunited as adults. The pairs of brothers were raised as fraternal twins, all living near Bogota. Jorge Enrique Bernal Castro and William Cañas Velasco had been raised as brothers, as had Carlos Alberto Bernal Castro and Wilber Cañas Velasco. But Wilber and William were actually identical twins, as were Jorge and Carlos.

They didn’t know about each other until 2013 when a woman who mistook William for his identical twin Jorge. Though unconvinced at first, William eventually put together the pieces of a puzzle that led back to his biological twin. When the quartet met, they realized each had behavior patterns similar to their twin, and all four became extremely close. 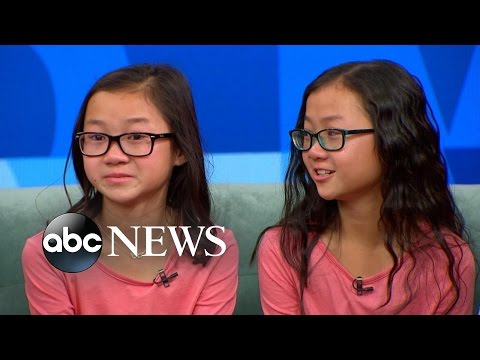 Audrey Doering and Gracie Rainsberry were separated at birth in China and adopted by two American families in 2007. Both 10-year-old girls were born with heart conditions, both underwent surgeries to fix their medical ailments, and both made full recoveries.

In 2016, Doering’s mother Jennifer wanted to surprise her adopted daughter for Christmas by giving her some history about her life in China. During her research she discovered a photo of Doering and another girl – later identified as Rainsberry – sitting on their Chinese foster mother’s lap.

Shocked, Jennifer Doering began researching who the other little girl was, and soon connected with Rainsberry’s mother on Facebook. The two met in person in January 2017 on Good Morning America and said they already had a lot in common.

Identical twin sisters Anais Bordier and Samantha Futerman were born in Busan, South Korea, in November 1987, and were quickly adopted by different families. Anais grew up in Paris and went into fashion design, while Samantha grew up in New Jersey and moved to Los Angeles. Both thought they were only children until Anais saw a YouTube video of Samantha and realized they looked and spoke exactly alike.

After reuniting over Skype, the duo now speak every day and wrote a book called Separated @ Birth: A True Love Story of Twin Sisters Reunited. The book alternates chapters, with half written by Anais, and half by Samantha. In 2015, they released a self-shot documentary called Twinsters.

Identical twins Jim Lewis and Jim Springer were separated by adoption at four weeks old in 1940, and reunited in 1979. They became involved in the famous Minnesota Twin Family Study, which examined the genetic disposition of twins, and found a number of remarkable similarities:

These twin brothers born in the 1930s have an extraordinary story. Oskar was taken to Germany and raised Catholic, while Jack remained in Trinidad, where the brothers were born, and was raised Jewish by their father. They reunited in the ’50s, and in between, Oskar had joined the Hitler Youth, while Jack worked on a kibbutz in Israel. The two spent a week together, then didn’t speak for 25 years.

Decades later, they reunited again, and this time commiserated on their many similarities, rather than the strange paths they embarked on while separated.

Ann Hunt was 77 when she learned she had a twin sister that she’d never met, Elizabeth Hamel. But Elizabeth knew, and had spent years looking for Ann. The two reunited in Los Angeles in 2014 thanks to a psychologist who specializes in studying the lives of twins.

Both were meant to be given up for adoption, but Elizabeth remained with her birth mother because of a spinal defect. Ann stayed in England her whole life, while Elizabeth moved around frequently and settled in the US. Both had married men named Jim, and both are deeply religious.

Unnamed Brother And Sister Who Married Each Other

In 2008, this pair of separated twins in England was shocked to find out that they’d unknowingly married each other. The story came to light when an English Member of Parliament revealed it (without using their names) to show the need for greater transparency in adoptions and more genetic information on birth certificates.

Both were shocked that they’d married their twin, who they didn’t know existed, and quickly had the union annulled. Their identities have never been made public.

Paula and Elyse were born in New York City, and were reunited in 2004, at the age of 35, in 2004. They had unknowingly been part of a study on whether separated twins (who were already slated to be adopted) would grow up to have the same traits, despite being raised apart.

Because of the controversy surrounding the study, New York changed its laws to require twins to be raised by the same family, and the results of the study have been embargoed until 2066. The two sisters wrote a book about their journey to finding each other, called Identical Strangers.

Born to an unmarried student in Finland, Barbara Herbert and Daphne Goodship spent the first four decades of their lives apart before reuniting in the late ’80s in London, where they were both adopted. In the time following their reunion, they’ve discovered remarkable parallels in their lives – both dressed almost the same way (and were wearing almost identical outfits when they met), took their coffee the same way, decorated their homes the same way, and both had suffered miscarriages that were followed by the birth of two boys and then one girl.

They also laugh and fold their arms the same way – leading to their nickname, the “Giggle Twins.”

While Tom Patterson and Steve Tazumi had very different upbringings after being separated following the death of their parents, they still share a number of similarities – including their career choice of owning gyms. Both were born in Japan in 1958, and Tom was raised in a Christian family in rural Kansas, while Steve was raised by second-generation Japanese-Americans in a Buddhist household.

They had known of each other for years, but didn’t reunite until 1999.

Though they were raised apart and didn’t meet until they were 45, Debbie Mehlman and Sharon Poset share a number of similarities. They both went into the field of social work, have extremely similar hobbies and dressing habits, and both have the unusual physical trait of crossing their eyes when they become excited about something.

In 1980, adopted triplets Bobby Shafran, David Kellman, and Eddy Galland became worldwide celebrities after discovering they were identical to each other, raised apart, and lived extremely close to each other. The trio were part of the controversial New York twins study, and kept the study secret, still harboring anger toward the researchers who split them apart when they were adopted.

Galland tragically committed suicide in 1995, and the other two brothers became activists for keeping adopted twins together.

Anna and Ella were abandoned by their birth mother in China in 2006, and found in separate places. Their adoptive parents had kept in touch with each other, as they both adopted through the same program. As the girls grew up, the parents realized they looked like each other and had DNA tests conducted.

Their suspicions proved to be true, and the girls were revealed to be twins. They reunited in 2013 and have stayed close.

Emile and Lin are fraternal twins born in Indonesia and adopted by separate families in Sweden. The girls lived about 20 miles away from each other for decades, but the adoptive parents lost touch with each other and neither had much information to go on when they started looking for each other.

They were finally able to find each other on Facebook.

The two Merediths are Chinese fraternal twins adopted by different families from the same orphanage, where they’d been brought in a few weeks apart. They grew up in Chicago, IL and Birmingham, AL, and both seemed to know they had twin sisters, even though there was little information in their adoptive files.

Meredith Grace’s adoptive father first saw Meredith Ellen in a picture on a Yahoo group for parents who’d adopted children from the same province in China, and the duo were reunited soon after. They see each other on occasion, and talk often.

Tags:InterestingViral Storiesweird
previousThe Very Best of the College Freshman Meme
nextAirlines Are Making You Miserable On Purpose – Here’s How And Why They Do It